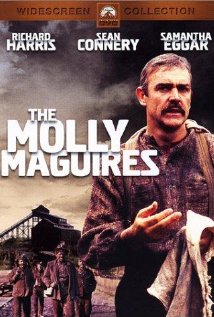 The paper titled “REBUTTING THE CANON,” posted to the right at the top of the essay collection, traces the use of the “Molly Maguire” epithet by nativist editors from the 1850s to the 1870s and the subsequent effort by “Molly Maguire” prosecutors to embed the taunt in both the national consciousness and the historical canon. I am scheduled to deliver highlights from this paper on April 2 at the national meeting of the American Conference for Irish Studies (ACIS) at Houston, hosted by the University of St. Thomas William J. Flynn Center for Irish Studies. The paper also traces the term’s influence on subsequent works, including those of J. Walter Coleman, Wayne Broehl Jr., and most recently, Kevin Kenny. In the late 1960s the term’s influence flowed to film when the Pinkerton Agency obtained script approval for Martin Ritt’s The Molly Maguires, with Sean Connery portraying John Kehoe. The paper also documents rebuttals of “Molly Maguire” propaganda, including Philip Foner's rebuttal from 1947.

The column at the tab “JOHN KEHOE,” located above, has been updated. It gives a description of Kehoe’s execution at Pottsville Jail, including the ministrations of the six Roman Catholic nuns and two priests who comforted the condemned man.

Apologies to all who have tried to connect with me through Facebook. As the manuscript nears completion, I hope to become more responsive.

Note: The 2020 ACIS meeting in Houston was cancelled due to concerns over the coronavirus outbreak.
Posted by Anne Flaherty at 10:13 AM