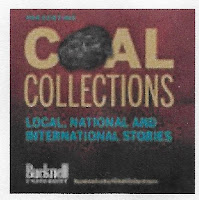 n November 17, 2016, in the Atrium Lobby at Bucknell University’s Weis Center, an event took place as part of the university’s “Coal Collections” series that may help change the way a chapter of U.S. history is interpreted.

Early visitors to the program titled “Molly Maguires in the Pennsylvania Coal Region” found an array of sofas arranged before a mounted display. A large blow-up, a number of feet high, of a black-and-white photo taken of alleged “Molly” leader John Kehoe shortly before his execution gave a hint as to how the event might proceed.

Presenters had evidently expected a small group. As the minutes ticked by, more and more attendees appeared. Helpers rolled forward carts loaded with folding chairs to seat the crowd that eventually numbered more than two hundred. Older community members commingled with students who came to hear the presentation. The scent of onions from the “hand pies” offered as a sample of coal region food lingered in the glass-enclosed room. It seemed almost impossible that this gracious setting would host a civil discussion of events that had so convulsed the commonwealth a century and a half before.

English professor and Joyce scholar John Rickard, a possible relative of alleged “Molly Maguire” Michael Lawler (also spelled Lawlor), opened the program. Rickard distributed a handout with samples of nineteenth-century nativist cartoons. These included Thomas Nast’s “The Usual Way of Doing Things,” with its ape-faced Irishman astride a keg of gunpowder, brandishing a whiskey bottle in one hand and a shillelagh in the other. 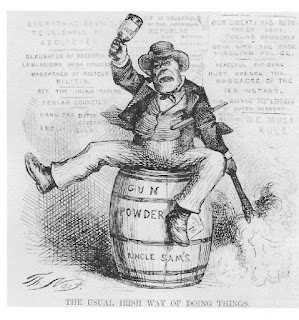 The remarks of Rickard and co-presenter Adrian Mulligan, chair of the Geography Department, took up the better part of the program. Both offered cogent assessments of this fantastically complex and controversial slice of U.S. and Irish American history. In his opening remarks, Rickard recommended the work of Kevin Kenny, the most recent academic scholar to address Pennsylvania’s “Molly Maguire” conflict.

Rickard’s description of Irish immigration to the United States included a discussion of both nineteenth-century nativist attitudes and the dangers suffered by Irish American laborers that led to eventual unionization, a logical outcome of historical Irish resistance. Rickard, whose ancestor Lawler had served as delegate to both 1871 Grand Council union arbitration proceedings at Mauch Chunk and 1875 anti-monopoly efforts at Harrisburg, spoke of the infiltration by Pinkerton detectives of the Ancient Order of Hibernians (AOH) in the Pennsylvania coalfields, and the resulting prosecution and execution of many AOH men as alleged “Mollies.” Rickard also addressed the Pinkerton influence on the writing of this history.

Mulligan, a native of Ireland, detailed the challenges shared by ethnic groups from different parts of the globe, including Chinese laborers and Irish American immigrants. The geography professor also spoke of the need for current scholars to learn from past history, in particular from the echoes of nineteenth-century inequities on current growing economic disparity.

first learned of the scheduled Bucknell presentation from friends who live in Bloomsburg. I subsequently contacted John Rickard and advised him of my research, in particular the essay collection posted from September through November 2016 to this blog, From John Kehoe’s Cell.

Both Rickard and Adrian Mulligan paused midway through their presentations to acknowledge my contributions. Both referred to my position as a “Molly” descendant and to the scholarship contained in the work posted to the blog, which includes documentation showing that prior to their arrests, a number of Hibernians charged as “Mollies” had been elected as school directors.

In his concluding remarks, Mulligan spoke of the need to share these findings with today’s students. Rickard had mentioned a number of times during his remarks that winners usually write the history. He concluded: “Now the descendants are writing the history.”

careful study of Pennsylvania’s “Molly Maguire” conflict yields innumerable echoes of today’s challenges, from the dangers of unbridled nativist rhetoric to the perils associated with fake news to the potentially tragic effects of corporate, political, judicial, and clerical abuse of power.

In 2013, I formed the Kehoe Foundation, with interested individuals, as a 501c3 research foundation. Its goals include education into the intricacies of Pennsylvania’s “Molly Maguire” conflict to help inform and illuminate current scenarios—educational, political, and cultural.

Posted by Anne Flaherty at 7:57 AM No comments:

eaders are invited to browse the collection of essays posted here.

“Who Was John Kehoe?” documents finds from my travels to libraries and archives in five states. My family's long-held belief in John Kehoe's innocence and in the political nature of the “Molly Maguire” conflict guided this search.

“The ‘Mollies’ Were Also School Directors” gives the background of five Hibernians prosecuted as “Mollies” who served in office as school directors. This piece also documents a resurgent tide of nativist feeling that manifested in the northeastern United States in the early 1870s.

“Pennsylvania’s ‘Molly Maguires’: The Surprising Western Caseload,” describes the “Molly” caseload in three western Pennsylvania counties. This effort from 1878 to 1882 involved dozens of defendants, but yielded few convictions and no executions.

Newspapers archived through the Library of Congress “Chronicling America” website helped inform this body of work.

Posted by Anne Flaherty at 3:31 PM No comments: