John Kehoe’s Hibernians “stand up to the mark like men” 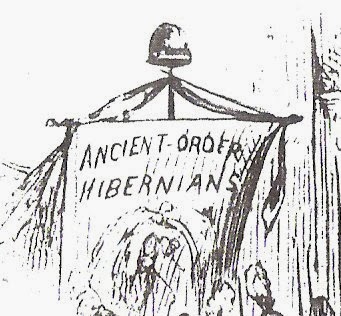 In 1875, St. Patrick’s Day in Pennsylvania’s Mahanoy City broke cold and clear. But conflict gripped the hard coal region. Festivities that honored Ireland’s patron saint would highlight a longstanding war between Irish priests under the authority of Archbishop James Frederick Wood and Irish Catholic men who marched under society banners.

Long-buried accounts of those festivities help reveal this historic truth: John Kehoe, jeered countrywide three years later as “King of the Molly Maguires,” had a history of nonviolent leadership.

In early 1875, three unsolved murders from the previous year had left the press trumpeting tales of the dreaded “Molly Maguires.” The murders had exacerbated tensions between Schuylkill County’s Irish and Welsh residents. By March, the third month of the mineworkers’ “Long Strike,” newspapers were also giving out lurid reports of outrages by striking mineworkers.

But Schuylkill County’s mineworkers had just returned triumphantly from their Anti-Monopoly Convention, held in Harrisburg early that month. Their effort against Franklin Gowen’s Philadelphia and Reading Railroad had succeeded. Gowen, accused of gross monopoly by even conservative newsmen, wielded monolithic power as head of the region’s “Coal Combination.” Schuylkill’s mineworkers had successfully contested that power. They’d helped mount a legislative challenge to Gowen’s railroad charter.

Irish names studded the Anti-Monopoly roster. At least one member of the county’s Ancient Order of Hibernians (AOH), Michael Lawler, had joined in the Harrisburg battle. Schuylkill’s Hibernians had something to celebrate.

By this time, 450 men swelled the ranks of Schuylkill’s AOH divisions. Pennsylvania’s AOH constitution, filed in 1871 with the state legislature, named March 17 “a National Holiday of this Order, to be celebrated by a public procession of its members.” But a hostile press continually labeled these Irish Catholic men as “Molly Maguires.” Tensions threatened even their St. Patrick’s Day parade.

Schuylkill’s AOH parade would take place in Mahanoy City. It would form on Main Street, led by the St. Clair Union Cornet Band. Kehoe would march at its head. The Girardville Flute Band, from Kehoe’s home town, would lead one division.

Reports filed by undercover Pinkerton detective James McParlan detail tensions between the AOH and the clergy at this time. Like the hostile press, McParlan routinely used the “Molly Maguire” smear to identify AOH men. McParlan’s report, written before the 1875 parade, tells of Shenandoah pastor Father O’Reilly calling down “God’s curse, and his curse … on all the Molly Maguires, and their families, and on every one who [goes] to Mahanoy to see the parade.”

McParlan’s reports also document the planning behind this proud display of solidarity. One tells of AOH treasurer Christopher Donnelly, a miner who served on New Castle’s school board, purchasing “green ribbons & fringe for Regalia & flags” for the 1874 parade. It tells of Donnelly’s hope “to have a grand turnout.”

In 1875, despite Father O’Reilly’s curse, Schuylkill’s Hibernians marched under the AOH banner. On that cold morning in March, members from divisions throughout the county traveled by train to Mahanoy City. Escorts met them and took them to Metz Hall. McParlan reported: “nearly all the Body’s [sic] of Molly Maguires were represented.” 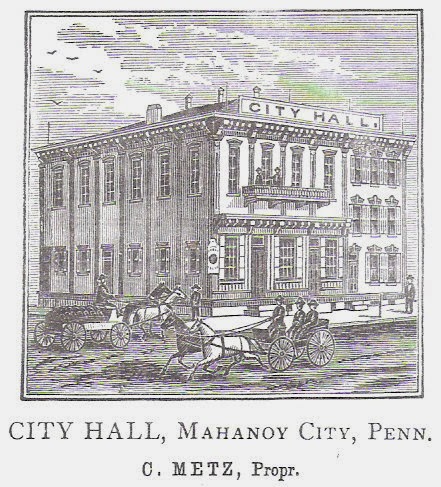 “County Delegate Kehoe made a speech and said that the parade was looked upon by the Citizens of Mahanoy, as a foreboding of bloodshed, and murder, and that he (Kehoe) wanted to inform them (the MM’s) that if any of them got drunk, or misbehaved, he (Kehoe) would strip them of their regalia, that he wanted to show to the Clergy and the public, that although they bore a bad name, they were by no means deserving of it.”

Kehoe urged the AOH marchers: “when they were opposed to, by any other party … they must all stand up to the mark like men, and not act like boys.”

Kehoe’s words took hold. Area newspapers described their effect: “The much-talked of parade of the Ancient Order of Hibernians was carried out with great éclat … The conduct of the large crowd was good throughout, and the appearance of those who took part in the demonstrations, was strikingly dignified and manly.”

Subsequent events blasted Kehoe’s hopes of taming clerical hostility. In a diocesan newspaper, a correspondent who signed himself “Obedience” revealed the day’s unlikely denouement: a conflict with yet another Irish priest.

“Obedience” told of a flag that belonged to St. Kieran’s parish in Heckscherville, a flag “borrowed from Father O’Brien for the St. Patrick’s Day parade.” The AOH men had “paraded with it in Mahanoy City and refused to return it.”

“Obedience” told the fate of the flag from St. Kieran’s, carried through Mahanoy City by Kehoe’s men on St. Patrick’s Day: “Father [O’Brien] … succeeded in recovering the flag on the 7th of May … he burned it on Sunday, May 9th, in presence of the congregation.”

Note: This would be the last AOH parade for some time in Schuylkill County. Arrests of AOH men for alleged “Molly Maguire” crimes started six months later. Of the Hibernians mentioned above, Lawler was arrested and gained immunity by testifying against fellow Hibernians, Donnelly served many years’ imprisonment, and Kehoe was hanged.